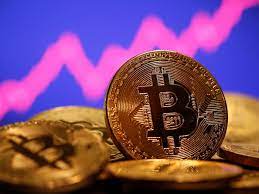 Bitcoin traded above $32,000 on Thursday after Elon Musk said Tesla would likely start accepting it as payment again as more renewable energy was used to mine the cryptocurrency.
Tesla had said in May that it would not accept Bitcoin as payment because of the vast amounts of electricity needed to mine it.
The environmental impact of cryptocurrency mining was discussed at the B Word conference on Wednesday, where the entrepreneur disclosed that he held Bitcoin as well as Ethereum and Dogecoin.
“Most likely the answer is that Tesla would resume accepting Bitcoin,” he said. “I wanted a little bit more due diligence to confirm that the percentage of renewable energy usage is most likely at or above 50 percent, and that there is a trend toward increasing that number, and if so Tesla would resume accepting Bitcoin.”
The vast amount of electricity needed to power the computers that mine cryptocurrencies such as Bitcoin has long angered environmentalists. However recent data from the University of Cambridge suggests the sector’s carbon footprint may be improving, especially since a crackdown in China which has told banks and payments platforms to stop supporting digital currency transactions. It followed a move to stop Bitcoin mining in Sichuan province. China last year accounted for 65 percent of global Bitcoin production.
Ark Invest founder and CEO Cathie Wood said she also expected the cryptocurrency to become more environmentally friendly while at the same time appealing as an inflation hedge in some emerging markets.