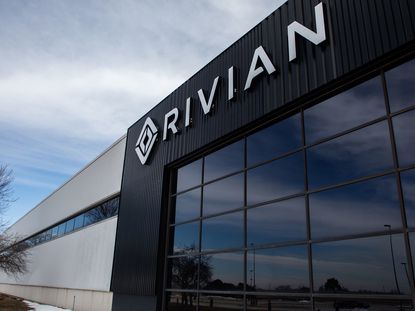 On November 10, San Jose, California-based electric vehicle maker Rivian Automotive Inc. became the latest name to join the ever-growing list of EV manufacturers going public.
As widely expected, Rivian’s IPO was another blockbuster after the company managed to raise about $13.5 billion by selling 175.95 million shares at $78 a pop. RIVN shares would go on to hit an intra-day high of $179.47 six days later before falling back to earth to trade at $118.11 on Tuesday’s intraday session. Amazingly, RIVN still boasts a market cap of $115 billion, a no mean feat for a company that currently generates nearly zero revenue.
The latest crash appears closely connected to last week’s announcement that Rivian and Ford Motors have shelved plans to collaborate on developing an electric vehicle, with each company opting to go solo.
However, parsing through the comments from Ford CEO Jim Farley in an interview with Automotive News reveals that this could actually be a positive for Rivian, and not something negative as the market appears to infer.
“Both their EV development and ours have advanced to a significant degree since the original deal was formed, giving each company more confidence to move ahead independently,” a Ford representative has told the Wall Street Journal.
Here are three other reasons why we remain largely bullish about RIVN despite the latest selloff.
The Ford/Amazon Investments
Indeed, the latest slide suggests that the market is glossing over just how deeply Rivian and Ford are connected: Ford has a large monetary stake in Rivian.
The giant automaker paid a total of $820 million for Rivian’s Series B and D offerings and also bought $415 million of the EV maker’s convertible debt offering. Those early investments are now worth over $13 billion, meaning Ford owns a ~12% stake in Rivian and 10.5% of the voting power.
But Ford is just one of the large institutional investors who have placed their faith in Rivian, with eCommerce giant Amazon Inc. being the other.
Amazon participated in no less than four funding rounds for Rivian, paying $1.35 billion, and also bought $490 million in convertible debt before buying 2.56 million shares worth $200M at the IPO. Overall, Amazon owns an 18.5% stake in Rivian after the IPO and holds 16.9% of the voting power.
Both Ford and Amazon are large, deep-pocketed investors who are unlikely to engage in panic selling at the first signs of trouble. This should give Rivian a level of stability that many early-stage EV startups lack.
The Tesla Connection
Another reason why we remain bullish on Rivian is, ironically, one of its biggest rivals, Tesla Inc.
According to Data Trek Research’s Nicolas Colas via Barron’s, the Rivian IPO has the potential to hurt Tesla as investors sell some of their Tesla shares and buy Rivian stock. That would be hardly surprising, given that Rivian has been widely touted as the next Tesla, and also due to the fact that FOMO (Fear Of Missing Out) has become pervasive in these social media-driven markets.
Indeed, Cola’s money-flow theory appears to hold some water, with the two stocks moving in opposite directions on most trading days since Rivian’s IPO.
Many analysts believe that both stocks can work if Rivian matches Tesla’s success, even to a much smaller degree, in winning a share of the EV market. Wedbush Securities managing director Dan Ives has argued that there will be such enormous growth within the EV sector that many companies will be able to thrive in the sectors. Many investors who missed out on Tesla’s meteoric rise since its 2010 IPO are hoping to ride Rivian from its early days.
In other words, there’s more than enough pie to go around.
That’s something we can already attest to, considering that the EV market has consistently been exceeding growth expectations by Wall Street.
Robust Pre-Orders
But, perhaps, the biggest reason why we think Wall Street and main street investment circles are excited about this EV upstart is the sheer number of pre-orders on its books.
Amazon has pre-ordered 100,000 of Rivian’s electric delivery vehicles or EDVs. Assuming each EDV sells for $125,000, Rivian has a guaranteed $12.5 billion in revenue as long as it’s able to deliver.
Besides the 100,000 Amazon pre-orders, Rivian has received another 55,400 pre-orders for its R1T, all-electric pickup, and R1S, seven-passenger SUV, models with an estimated price ranging from around $70,000 to $75,000 as per Car and Driver magazine. These additional pre-orders should generate about $4 billion in revenue.
But that’s not all.
On Monday, Bloomberg reported that Rivian is in talks with recreational vehicle rental company Outdoorsy Inc. about potential electric truck and SUV orders over the coming years as the company looks to build out its rental fleet. According to Chief Executive Officer Jeff Cavins, Outdoorsy is targeting an initial order of ~1,000 Rivian trucks.
Overall, with the EV space becoming increasingly competitive, it’s not going to be an easy journey for Rivian or its peers. Further, the company’s steep valuation leaves it with little room for error, meaning it’s got to execute flawlessly. The latest selloff is not connected to any misstep by the company but is merely profit-taking after a huge surge post IPO. Rivian has the massive EV momentum on its side and could start squeezing the shorts once those deliveries start rolling off its factories.

Other companies that could capitalize on the electric vehicle boom:
The media buzz used to revolve entirely around Tesla, but lately that story has changed.
Ford recently made headlines with their announcement of their electric truck, the Ford F-150 Lightning. With the F-150 being the best-selling vehicle in America for 39 years and running, this could be a huge turning point for the EV industry. And just days ago, Biden brought all eyes to the electric F-150 as he took it out for a ride at their motor plant in Dearborn, Michigan.
That was followed by nearly 45,000 reservations in 2 days from the hordes of people trying to get their hands on one.
While many have high hopes because of the popularity of the F-150…The F-150 Lightning could see even greater success since it’s helping overcome what’s been one of the EV industry’s biggest barriers in the past.
The extra cost has kept EVs mostly limited to the wealthy. But as the F-150 Lightning is set to be released with a price tag of $39,974, it’ll be $16K cheaper than Tesla’s new Cybertruck. And after federal tax credits and state incentives being poured in…
It could be even cheaper than a gas-powered truck at this point. The Lightning is expected to hit the shelves coming in 2022, but there’s another EV truck that will be coming even sooner…
Nio Limited (NYSE:NIO) is one of Tesla’s most exciting new competitors, dominating the Chinese EV markets. After a rough start after going public in 2018, it’s been on a tear, producing vehicles with record-breaking range.
Just a year ago, no one could have imagined how successful the Nio was going to be. In fact, many shareholders were ready to write off their losses and give up on the company. But China’s answer to Tesla’s dominance powered on, eclipsed estimates, and most importantly, kept its balance sheet in line. And it’s paid off. In a big way.
Nio has made all the right moves over the past year to turn heads on the streets and in the marketplace… From its stunningly beautiful – and fast – EP9 supercar to its new line of family-friendly high-performance sedans, Nio is well on its way to retaking control of its local market from Elon Musk’s electric vehicle giant. And as Chinese EV sales continue to soar…Nio’s already-impressive ascension to electric superstar is only going to accelerate from here.
Li Auto is another up-and-comer in the Chinese electric vehicle space. And while it may not be a veteran in the market like Tesla or even NIO, it’s quickly making waves on Wall Street. Backed by Chinese giants Meituan and Bytedance, Li has taken a different approach to the electric vehicle market. Instead of opting for pure-electric cars, it is giving consumers a choice with its stylish crossover hybrid SUV. This popular vehicle can be powered with gasoline or electricity, taking the edge off drivers who may not have a charging station or a gas station nearby.
Though it just hit the NASDAQ in July of last year, the company has already seen its stock price more than double. Especially in the past month during the massive EV runup that netted investors triple-digit returns. It’s already worth more than $30 billion but it’s just getting started. And as the EV boom accelerates into high-gear, the sky is the limit for Li and its competitors.
General Motors is one Detroit’s old school automakers, and it’s looking to catch a ride on the EV bandwagon, benefiting from a shift from gas-powered to alternative technology such as hydrogen and electricity. It’s now well over 100 years old and has survived where many others have failed. Even with the downfall of Detroit, GM has persisted, and that’s due in large part to its ability to adapt. In fact, GM’s dive into alternative fuels began way back in 1966 when it produced the world’s first ever hydrogen powered van. And it has not stopped innovating, either.
Recently, GM dropped a bomb on the market with the announcement of its new business unit, BrightDrop. The company is looking to capture a key share of the burgeoning delivery market, with plans to sell electric vans and services to commercial delivery companies.
GM isn’t just betting big on EVs, either. It’s also looking to capitalize on the autonomous vehicle boom. Recently, it announced that it’s majority-owned subsidiary, Cruise, has just received approval from the California DMV to test its autonomous vehicles without a driver. And while they’re not the first to receive such an approval, it’s still huge news for GM.
Toyota Motors is another leader in the industry. Beginning with the Prius, Toyota has been on the cutting edge of green transportation for years and years. And now, it has developed a fuel cell system module and looks to start selling it after the spring this year in a bid to promote hydrogen use and help the world achieve carbon neutrality goals, the world’s largest car manufacturer said in February.
According to Toyota, the new module can be used by companies developing fuel cell (FC) applications for trucks, buses, trains, and ships, as well as stationary generators.
The fuel cell system module can be directly connected to an existing electrical instrument provided with a motor, inverter, and battery, Toyota said, noting that the modularization significantly improves convenience.