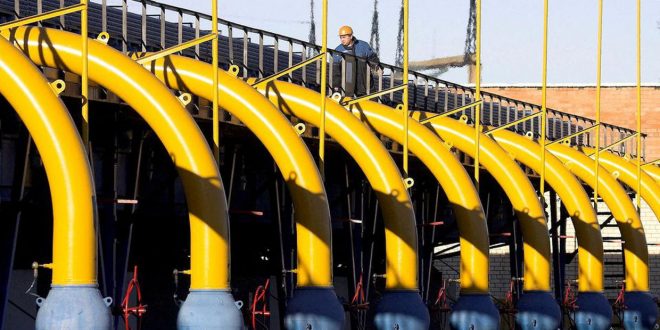 Natural gas in Europe rose again, extending a rally as a scorching summer boosts demand while supplies from Russia remain limited.
Benchmark futures jumped as much as 4.7%, reversing earlier declines. Energy market concerns are deepening as the hot and dry weather boosts gas consumption for cooling. It’s also drying up the Rhine River, key for transporting everything from coal to diesel, and forcing utilities to use more gas as a replacement. That could throw governments’ plan to cut demand ahead of the winter into disarray.
The concerns are being partially countered by storage sites across the region continuing to be replenished in line with the five-year average. European inventories are 75% full, and Germany has reached an intermediate refill target two weeks ahead of schedule. But the country’s energy regulator warned that stockpiles would last only two and a half months if Russia cuts off supply completely.
High liquefied natural gas imports into Europe helped fill storage, but even that is now becoming more expensive as Asian importers are buying more aggressively to meet their own demand and to stockpile for the coming winter.
“The looming energy crisis remains at the forefront,” analysts at Deutsche Bank AG said in a note. “While gas may be available, it is set to come at a higher clearing price.”
Front-month futures at the Dutch hub, the European benchmark, were 3.9% higher at 234.91 euros a megawatt-hour by 10:25 a.m. in Amsterdam, after falling as much as 2.6% earlier. They settled just shy of a record closing price on Tuesday. The equivalent contract in the UK rose 4.3% in Wednesday.
German year-ahead benchmark power also reversed declines to trade 0.9% higher at 512 euros a megawatt-hour. Prices are more than five times higher than this time last year.
Also read: Spain Burns More Gas in Costly Setback to Drive for Clean Power
Germany, Europe’s largest economy, has taken one of the biggest hits from the energy crisis due to its traditionally heavy dependence on Russian supplies. The government has urged lower consumption, warned of rationing and this week slapped a levy on gas use. It’s also rushing to set up floating terminals to import liquefied natural gas.
The casualties are piling up. Utility Uniper SE, which was rescued with a government bailout last month, suffered a net loss of more than 12 billion euros in the first half as the company struggled to fill supply gaps left by Russia. Nyrstar NV announced this week that it would halt production in one of Europe’s biggest zinc smelters following the energy crisis. Others producing everything from fertilizers to aluminum have also been hit.
“Uniper has for months been playing a crucial role in stabilizing Germany’s gas supply — at the cost of billions in losses resulting from the sharp drop in gas deliveries from Russia,” Chief Executive Officer Klaus-Dieter Maubach said.