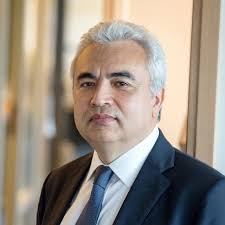 International Energy Agency (IEA) member countries have committed to release 61.7 million barrels of oil reserves as of Friday as part of the emergency stock release announced by the agency on Tuesday.
The amount exceeds the 60 million barrels of oil that IEA countries had pledged to release from emergency stocks to bring stability to energy markets as the Russia-Ukraine crisis intensifies.
The United States will provide 30 million barrels followed by Japan with 7.5 million, South Korea with 4.4 million, Germany with 3.2 million, and the UK with 2.2 million.
“The decision taken to release emergency stocks – for only the fourth time in the IEA’s history – has sent a strong message that IEA members are unified in support of Ukraine and will do all they can to provide stability to the market during these difficult days,” IEA’s executive director Fatih Birol said.
IEA member countries hold 1.5 billion barrels in public reserves and about 575 million barrels under obligations with industry.
The initial response of 61.7 million barrels represents just 3 per cent of total emergency reserves, but is the largest stock release in the agency’s history.
The co-ordinated drawdown is the fourth in the history of the IEA, which was created in 1974. Previous collective actions were taken in 2011, 2005 and 1991.
Emergency oil stocks in IEA member countries are either in the form of public stocks or stocks held by industry under an obligation of the government.
In the case of public stocks, these can be released through tenders or loans to the market, which will be launched and released over the coming weeks depending on the specific stockholding system in each country.
In the case of obligated industry stocks, obligations will be lowered, through legislative decrees or administrative mandates, to make the volumes available for consumption.
“This can take a matter of days,” IEA said.
The US and EU have levied a slew of sanctions against Russia, which is a major global energy producer and leads the Opec+ 23-member alliance along with Saudi Arabia.
“Events in Ukraine remain deeply distressing and the impacts on energy markets are becoming more pronounced. We continue to monitor the situation closely. If necessary, we are ready to recommend additional steps to build on this initial release,” Mr Birol said.
Russia is the world’s third largest oil producer and the largest exporter, according to IEA. Its exports of about 5 million barrels per day of crude oil represent roughly 12 per cent of global trade — and its approximately 2.85 million bpd of petroleum products represent about 15 per cent of global refined product trade. About 60 per cent of Russia’s oil exports go to Europe and another 20 per cent to China.