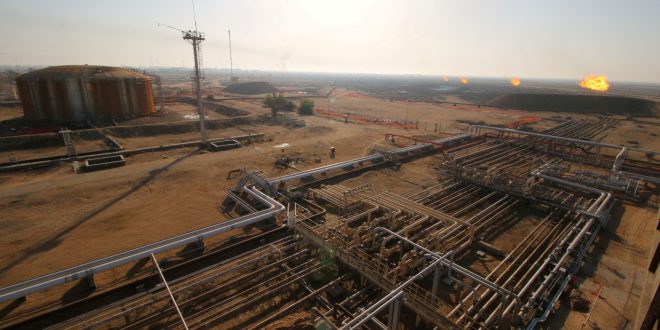 Iraq’s efforts to control revenue collected by the Kurdistan Regional Government (KRG) have extended to requests for oil and gas firms operating in the semi-autonomous region to sign new contracts with state-owned marketer SOMO rather than the KRG.
Oil Minister Ihsan Ismael on May 7 said Iraq’s oil ministry would start implementing a February federal court ruling that deemed the legal foundations of the Kurdistan region’s oil and gas sector unconstitutional.
A letter seen by Reuters shows that the oil ministry appointed international law firm Cleary Gottlieb Steen and Hamilton to approach some oil and gas firms operating in the Kurdistan region to “initiate discussions to bring their operations into line with applicable Iraqi law.”
Implementing the court decision “will require changes to the contractual regime” for the companies, the letter added. Other firms received a letter directly from the oil minister, one source said.
The KRG has repeatedly rejected the federal court ruling.
The letters, which were sent on May 8, mark the first direct contact between the ministry and oil firms operating in the Kurdistan region. The move follows years of attempts by the federal government to bring KRG revenues under its control, including local court rulings and threats of international arbitration.
The implications of the latest move are not fully clear as more than seven months since elections in Iraq, the formation of a government is still underway.
An Iraqi oil ministry legal adviser, who spoke on condition of anonymity, told Reuters that a joint government committee, including representatives from the oil ministry including the minister, Iraq’s National Oil Company (INOC) as well as the Federal Board of Supreme Audit (FBSA), will conduct a contractual review.
The aim is to eventually sign contracts with the central government and not the KRG, the adviser added.
Foreign oil firms present in the Kurdistan region including Genel Energy, Chevron and Gulf Keystone , and Cleary Gottlieb declined to comment, while Iraq’s oil ministry and oil and gas firm DNO did not immediately respond to requests for comment.
The oil ministry has yet to receive responses from the companies concerned and could take further legal measures in the case of no response, one oil ministry official said, without elaborating.
Foreign oil firms are unlikely to engage with Baghdad directly without coordination with the KRG, one oil firm representative told Reuters.
Tensions flare
Baghdad’s persistent attempts to implement the ruling have the capacity to worsen already fraught tensions with Irbil.
Iraq’s state-owned North Oil (NOC) claimed on Saturday that KRG forces took control of some oil wells in the disputed region of Kirkuk but the KRG denied the allegation, claiming it was designed to create chaos.
On May 12, INOC published an analysis detailing how the KRG’s production-sharing contracts are financially worse for both the government and foreign oil firms than federal Iraq’s own technical service contracts.
Meanwhile, Iraq has struggled to attract major fresh investments into its federal energy industry since signing a flurry of post U.S.-invasion deals over a decade ago.
The Iraqi government has cut oil output targets repeatedly as international oil companies that signed those initial deals leave due to poor returns.
Ismael on Monday said Iraq now plans to boost its crude production capacity from around 5 million barrels per day (bpd) to 6 million bpd of crude capacity by the end of 2027, a sharp downward revision from a previous target of 8 million bpd by that year.