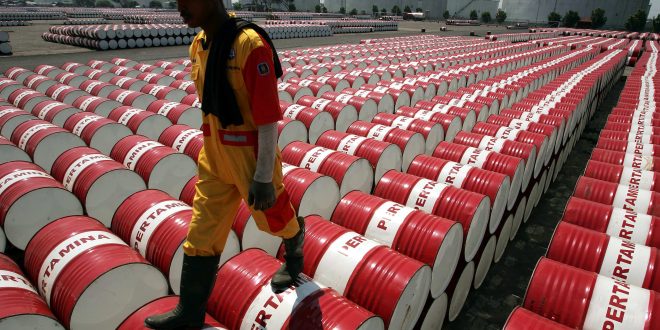 Oil prices were little changed on Thursday as investors grappled with falling stockpiles in the US, rising output from Russia and worries about a potential global recession.
Brent crude futures climbed 10c, or 0.1%, to $93.75 a barrel by 3.47am GMT. US crude futures gained 10c, or 0.1%, to $88.21 a barrel.
Prices rose more than 1% during the previous session, though Brent touched its lowest level since February.
Futures have fallen over the past few months, as investors have pored over economic data that has spurred concerns about a potential recession that could hurt energy demand.
British consumer price inflation jumped to 10.1% in July, its highest since February 1982, intensifying a squeeze on households.
The oil market remains in a multiyear tightening cycle, RBC Capital’s Mike Tran said, adding that investors are in search of near-term upside catalysts.
“The recession fears are well acknowledged, but the bullish catalysts such as the return of China or supply degradation from Russia remain elusive,” he added.
China’s refining output remained lacklustre in July as strict Covid-19 lockdowns and fuel-export controls curbed production.
In supply, Russia has started to gradually increase oil production after sanctions-related curbs and as Asian buyers have increased purchases, leading Moscow to raise its forecasts for output and exports until the end of 2025, an economy ministry document reviewed by Reuters showed.
Russia’s earnings from energy exports are expected to rise 38% this year partly due to higher oil export volumes, according to the document, in a sign that supply from the country has not been affected as much as markets originally had expected.
US crude stocks fell by 7.1-million barrels in the week to August 12, Energy Information Administration (EIA) data showed, against expectations for a 275,000-barrel drop, as exports hit 5-million barrels a day, the highest on record.
Saudi Arabia’s crude oil exports rose in June, while output increased to a more than two-year high, data from the Joint Organisations Data Initiative (JODI) showed on Wednesday.
Meanwhile, the market is awaiting developments from talks to revive Iran’s 2015 nuclear deal with world powers, which could eventually lead to a boost in Iranian oil exports.
Iranian crude exports could climb for a third straight month in August, buoyed by Chinese demand as Russian oil becomes more expensive, data firms tracking the flows said.

Previous Japan Utilities Get Contract Offer from New Russian Operator of Sakhalin-2
Next U.S. Crude Inventories Fell to Lowest Level since 2004 in June