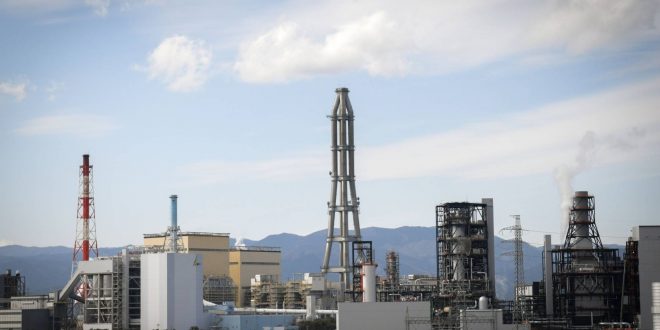 Saudi Aramco, which made the announcement Sunday, produced the fuel, which it does by converting hydrocarbons into hydrogen and then ammonia, and capturing the carbon dioxide byproduct. Japan will receive 40 tons of blue ammonia in the first shipment, Aramco said.
Ammonia can be burned in thermal power stations without releasing carbon emissions. That means it has “the potential to make a significant contribution to an affordable and reliable low-carbon energy future, according to state-controlled Aramco.
Japan aims to be a world-leader in the use of hydrogen, which is contained in ammonia. The country has committed to reducing its greenhouse gas emissions 26 percent by 2030 from 2013 levels, under the Paris climate pact.
Blue ammonia is a feedstock for blue hydrogen, a version of the fuel made from fossil fuels with a process that captures and stores C02 emissions. Hydrogen from renewable energy that creates no emissions is known as green hydrogen.
Saudi Arabia, the world’s biggest oil exporter, is increasingly trying to counter its reputation for producing dirty energy. In recent months, Aramco has highlighted the low volume of greenhouse gases emitted from pumping Saudi crude, programs to boost gas production and plans to grow carbon-absorbing mangroves.
US firm Air Products & Chemicals Inc. signed an accord in July with Saudi-based ACWA Power International and the kingdom’s planned futuristic city of Neom to develop a $5 billion hydrogen-based ammonia plant powered by renewable energy.
Saudi chemicals maker Sabic — majority-owned by Aramco — and Mitsubishi Corp. are overseeing transport logistics for the blue ammonia project in partnership with JGC Corp., Mitsubishi Heavy Industries Engineering, Mitsubishi Shipbuilding Co. and UBE Industries.
“This world-first demonstration represents an exciting opportunity for Aramco to showcase the potential of hydrocarbons as a reliable and affordable source of low-carbon hydrogen and ammonia, said Aramco’s chief technology officer, Ahmad al-Khowaiter.