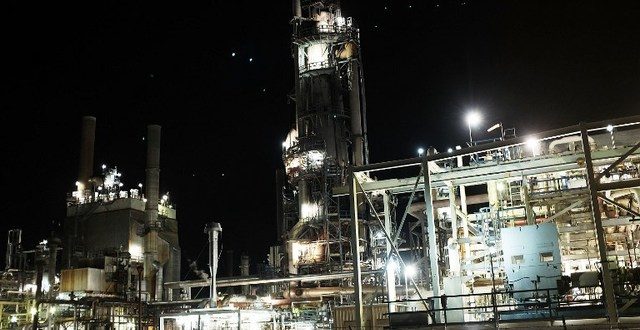 US Refiners Look to Outdo Canadians in Renewable Fuel

US oil refineries are moving aggressively to produce renewable diesel, partly to cash in on Canada’s greener fuel standard before Canadian refiners modify their own plants.
Canadian Prime Minister Justin Trudeau’s government intends to present its Clean Fuel Standard this year, aiming to cut 30 million tons of emissions by 2030.
Renewable diesel, made by processing spent cooking oil, canola oil or animal fats, can be used in high concentrations or without blending in conventional diesel engines.
So far, Canadian companies have been slow in preparing to make the fuel, with only three projects publicly announced, said Ian Thomson, president of the Advanced Biofuels Canada industry group.
At least five US refiners have announced plans to produce renewable diesel or said they are considering it, including Phillips 66 and HollyFrontier Corp.
“This is Canada’s to lose,” Thomson said. “If Canada’s refiners want to get left out of the game, they will dig their heels in and oppose the standard. Meanwhile, the Americans will build.”
Renewable diesel is a niche market, making up just 0.5 percent of the 430-billion gallon per year global diesel market, according to investment bank Morgan Stanley.
Greenhouse gas emissions from renewable diesel and traditional biodiesel are typically 50 percent to 80 percent lower than conventional diesel.
US states such as Colorado and Washington are moving toward such standards and along with Canada’s fuel standard, a sufficient market is developing, said HollyFrontier executive Tom Creery, on the company’s second quarter earnings call.
Suncor Energy Inc., Canada’s second-biggest oil producer, has been considering a renewable diesel plant in Montreal, but the pandemic slowed its progress, said Chief Sustainability Officer Martha Hall Findlay.
Canadian refiners face longer regulatory delays than competitors in the US, setting them at a disadvantage, she said.
“The timelines would force investment in facilities outside Canada because of the sheer fact that we can’t build them that fast,” Hall Findlay said. “That seems a little backward.”
New supply could far overshoot demand if all announced projects are built, Morgan Stanley said.
Parkland Fuel Corp. is producing renewable diesel and renewable gasoline in its Burnaby, British Columbia refinery, and is considering expanding capacity, said Senior Vice President Ryan Krogmeier. “There’s a tremendous opportunity for Canada to harness its natural resources,” he said. “The market for renewable fuels is really taking off.”
However, Canada’s criteria for crops to be made into biofuels are too strict to be practical, said farmer Markus Haerle, a corn and soybean grower and chair of Grain Farmers of Ontario.
Federal officials have told the group that farms must meet strict requirements to qualify their crops, such as growing them at least 30 meters from waterways and on land that has not been significantly cleared of trees.
“We know farmers won’t be able to be certified under those criteria,” Haerle said.
The same standards will apply to imported fuels, said Samantha Bayard, a spokeswoman for Canada’s Environment Ministry.