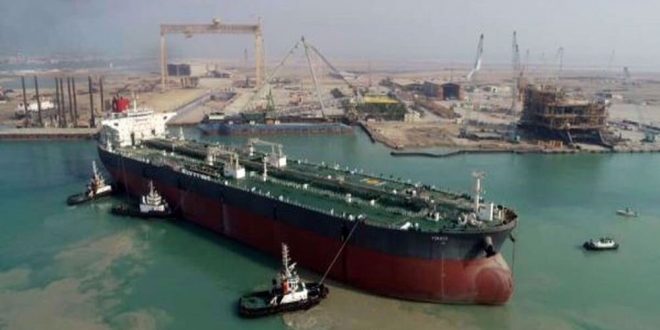 Venezuela’s President Nicolas Maduro says the country has received an advanced oil tanker from Iran as part of a contract between Tehran and Caracas based on which the Islamic Republic has so far delivered three advanced vessels to the South American country.
“We have just received a ship with the world’s most advanced engineering and technology,” Maduro said according to Venezuelan state TV.
According to the president the ship which has been manufactured by Iran Marine Industrial Company (Sadra) upon Venezuela’s order, “now comes to serve as a cargo ship for our revolutionary PDVSA.”
The South American country received the second tanker on June 11, 2022, in a ceremony attended by the presidents of the two countries.
The presidents of the two countries spoke with the crews on the vessel’s dock in the Persian Gulf via video conference and were briefed on the construction and operation of this ocean-going tanker.
With a deadweight between 80,000 and 120,000 metric tons (mt), ‘Aframax 2’ would carry 113,000 mt or 750,000 barrels of oil. The 250-meter-long vessel is equipped with a 21,000-horsepower engine and three diesel generators that are capable of producing 900 kilowatts of electricity.
Maduro said in June that the fourth tanker will also join the Venezuelan state-owned oil and natural gas company (PDVSA) in 2024, marking the conclusion of a 2006-signed contract on four oil tankers between the two states.
The tankers are produced by SADRA which is located along the Persian Gulf coast in Bushehr province.
Iran and Venezuela signed a 20-year strategic partnership during Maduro’s visit to Tehran in early June. The strategic document includes cooperation in the fields of politics, culture, economy, oil, and petrochemicals, and tourism.
While in Tehran, the Venezuelan President met with Iranian Oil Minister Javad Oji during which the two sides stressed the expansion of energy ties, especially in the oil industry.
In this meeting, Oji and Maduro discussed and decided on issues such as fuel supply to Venezuela and also the exports of petroleum products, petrochemical products, and petrochemical catalysts to the south American country.