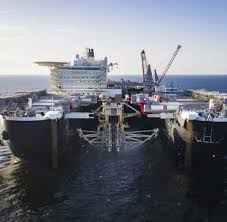 Russia reduced natural gas to Europe again on Friday, including cutting flows by half to Italy and Slovakia and completely to France, as countries have worked to ease their dependence on Russian supplies amid the war in Ukraine.
It marks the third day of significant reductions to the fuel that powers industry and generates electricity in Europe, which also has hit Germany and Austria. It has further spiked already-high energy prices that are driving record inflation in the European Union.
Russia has blamed a technical problem for the cuts to the key Nord Stream 1 pipeline serving Germany and France, saying equipment being refurbished in Canada was stuck there because of Western sanctions.
Leaders in Germany and Italy called the reductions a political move, and it’s escalated the energy tensions in Europe, following Russia’s previous cutoff of natural gas to Poland, Bulgaria, Finland, the Netherlands, and Denmark, AP reported.
Russia told Slovakia’s state-controlled gas company SPP that it would reduce deliveries to the country by 50%, SPP director Richard Prokypcak told a conference in Bratislava. The reason for the reduction has not been made clear.
Russian state-owned energy giant Gazprom told Italian gas company Eni on the same day that it would supply only 50% of the amount of gas requested for Friday, reducing the flow to one of Europe’s biggest importers of Russian gas for the third day.
And France is no longer receiving any natural gas from Russia. The French gas network operator GRTGaz said Russian supplies via Germany came to a halt Wednesday, after dropping by 60% over the first five months of the year.
Russia has said Canadian sanctions prevented German partner Siemens Energy from delivering equipment that had been sent there to be overhauled. The German government said maintenance shouldn’t have been an issue until the fall and the Russian decision was meant to sow uncertainty and push up prices.

Previous U.S., EU and Japan Eye Curbing Methane Emissions in Oil and Gas Sector
Next OPEC+ Mulls what to do after the Oil Pact Ends