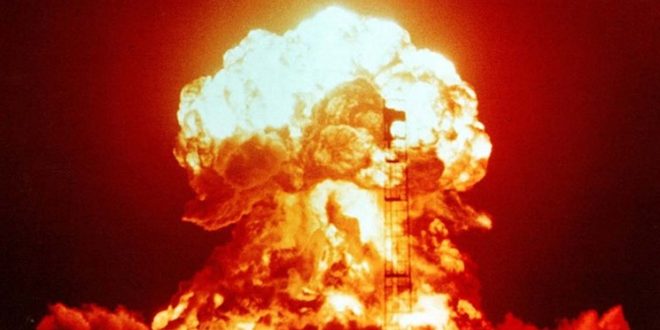 Moscow has never made nuclear threats, Russian Foreign Ministry Spokeswoman Maria Zakharova said on Friday following the first Conference of States Parties to the Treaty on the Prohibition of Nuclear Weapons.
“Statements about mutual threats of using nuclear weapons, which we heard before the conference, are perplexing, as well as statements about Russia’s alleged nuclear blackmail that were made at the conference. We would like to reiterate that Russia has never made any nuclear threats,” she pointed out, TASS reported.
According to Zakharova, Russia’s approach is based solely on the logic of nuclear deterrence, particularly in a situation “where NATO countries, which proclaimed themselves a nuclear alliance, escalated the Ukrainian crisis and launched a hybrid campaign against Russia, are dangerously poised on the brink of a direct armed conflict”.
The Russian diplomat added that as long as there were nuclear weapons, the logic of nuclear deterrence remained an effective way to prevent nuclear conflict and large-scale wars.
“Russia’s policy is based on the need to prevent nuclear war and attempts to distort it for propaganda purposes are unacceptable,” she emphasized.
Russia will not join the Treaty on the Prohibition of Nuclear Weapons (TPNW), Zakharova said.
According to her, assertive advancement of the treaty deepens disunity between states and undermines the regime of Treaty on the Non-Proliferation of Nuclear Weapons.
“In connection with the desire to put on a permanent basis the efforts to universalize the TPNW, as recorded in the final documents of the conference, we emphasize: Russia does not intend to join this agreement and believes that the treaty does not establish any universal standards: neither now nor in the future,” she added.
According to Zakharova, Moscow continues to firmly adhere to the position that the development of the TPNW was premature, erroneous and, in fact, counterproductive. This agreement does nothing to reduce the growing nuclear risks and does not bring humanity one step closer to the goal stated in it, and the approach laid down in the TPNW only leads to an increase in contradictions between nuclear and non-nuclear states, she stressed.
“It does not take into account the military-political and military-strategic situation and runs counter to the principle that nuclear disarmament should be carried out in such a way that it would lead to ‘an increase in the level of security for all’ We do not see realistic ways to implement any – or practical measures to directly reduce nuclear weapons,” the diplomat continued.
“Russia, like all other states with military nuclear potential, did not take part in the conference of states-participants of the TPNW and does not intend to do so in the future. We also do not plan to build joint work with auxiliary structures created as part of the interaction of the participants of the TPNW to implement it,” she stressed.